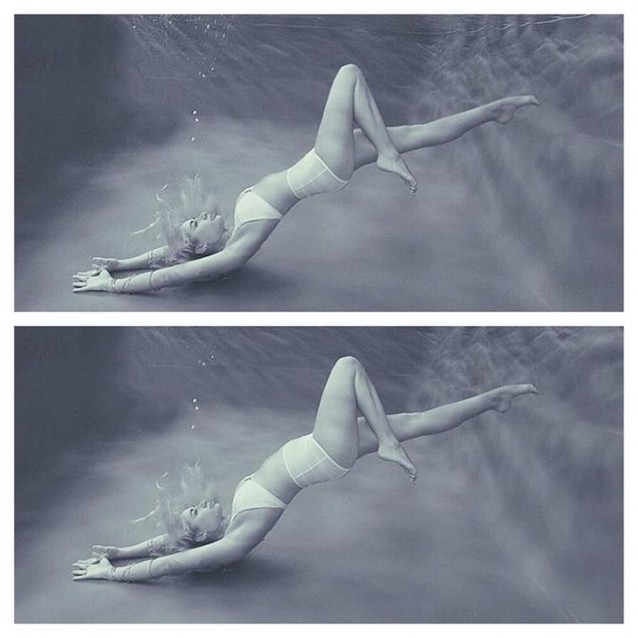 Meaghan Kausman’s photoshopped image is above; the untouched photo is below - Image  from Instagram
An Australian model is speaking out against a company that altered a photo of her body to appear several sizes smaller, saying she was “extremely shocked” to see the photoshopped image online after agreeing to participate in a photoshoot for the swimwear brand Fella Swim.

Meaghan Kausman posted the before and after photos to her Instagram account, declaring that “I refuse to stand by and allow ANY company or person to perpetuate the belief that ‘thinner is better.'” She pointed out that she’s a size 8, not a size 4, and all women’s bodies are beautiful. “This industry is crazy!!!! It is NOT OKAY to alter a woman’s body to make it look thinner,” she wrote in her Instagram caption.

Kausman — whose father, Dr. Rick Kausman, is a body image expert and the director of an organization that provides support to people with eating disorders — appeared on the Australian version of the Today Show to discuss the controversy.


“I saw that they had practically cut me in half. So it was pretty mind-blowing,” the modelsaid. “I think my jaw dropped for about 5 minutes. I was really, really taken aback that they felt the need to do that and that they could take the creative licence to alter it because of what they thought would fit into their cultural ideal of what beautiful was.”

Kausman said that growing up with her father helped her cultivate a healthy and positive body image. She explained it was important for her to speak out about her displeasure with being photoshopped because young girls and boys need to understand that the images they see in magazines and on TV don’t actually reflect reality.

Dr. Rick Kausman shared the before and after shots on his Facebook page, writing that he’s a “proud dad” and thanking people for their ongoing support. Appearing alongside his daughter on the Today Show, he pointed out that the unrealistic images in fashion magazines have a real impact on teens’ self-image, confidence, and mental health. Ultimately, the pressure for women to conform to a certain ideal of beauty and thinness can have serious consequences for the girls who grow up believing they’re too fat.

Swimsuits in particular are often a flash point in the controversy over society’s unrealistic expectations for women’s bodies. According to the research in the field, women feel theworst about their appearance when they’re shopping for bathing suits, and some of them choose to avoid beaches altogether because of that low self-esteem. One study even found that women wearing swimsuits tend to under perform on math testsbecause they’re too preoccupied with the ways their bodies might look.

Over the past several years, partly thanks to social media, there’s been an increasingpublic backlash to overly retouched images of women’s bodies. Kausman is the latest in a growing list of public figures who have expressed disappointment with Photoshopped images of themselves. After a recent petition asking Seventeen Magazine to include more images of “real girls” went viral, the publication was forced to publicly respond andpromise to do better. Although progress is slow, there’s some evidence that messages of body acceptance are starting to penetrate American pop culture.

Fella Swim has since apologized to Kausman and removed the Photoshopped image of her from their site, but the model is still glad she got a chance to speak out. “I am extremely humbled and thankful for all the messages, comments and emails I have received,” Kausman said. “I am so happy that I have given so many people a voice in this industry.”